On the ridge between Rosedale and Farndale stands the Blakey Inn. Known to many generations of our Ryedale and Cleveland forbears as The Lion. Few public houses are more remote from the urban world. But roundabout Blakey there is enough evidence that the rigg on which it stands has known travellers since men first set foot in the district. 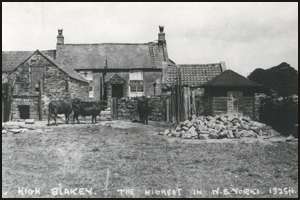 The Black Howe can be seen near the riggway, a few feet from the Inn that leads to Old Ralphs Cross. Cockpit Howe is another old burial mound of the Neolithic people not far away. From the east window of the bar can be seen the grave at Loose Howe where a Bronze Age chieftain was interred in a boatlike oak coffin, armed, clothed and equipped for his "voyage," with a smaller dugout placed alongside.

We cannot suppose that the thin barley crops of such remote ancestors sustained the earliest Inn at Blakey yet there is an old tradition that there once stood outside a "Roman sign with the legend traveller's rest." Finds of Roman date have come from nearby Farndale and from Cock Head near Hamer House, but nothing from Blakey. The sign, if it existed, was perhaps no more than the advertising effort of some Georgian publican with a Latin bent. 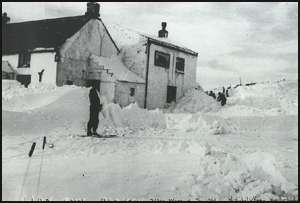 The Inn's origins must be looked for in a later age, but even then the mystery remains. The road from Blakenhou to Ralph's cross is mentioned in the charter issued by Peter de Brus to Guisborough Priory in 1200 A.D. when those monks got pasture rights to the north-west.

More than a century later, during the reign of King Edward III, a house plot and ten acres of land was granted to the Order of Crouched Friars. They were unable to find a home at York and got this remote site for the building of an oratory and other buildings. It cannot be shown that the friars settled at Blakey but Mr Raymond Hayes, the archaeologist, of Hutton-le-Hole, says ten acres is the extent of the Blakey enclosures and there is some trace of a small ruined building near the spring in their west walls. 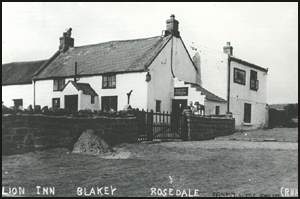 Even if the friars settled further over in Farndale, perhaps near its church, it may be that they crowded the Inn to lighten their poverty. Friary Inns are common enough in all parts of the country. Scarborough had at least two. Certainly the Inn has some centuries of life behind it - if only as a small settlement which gradually specialised in the hoteller's trade. On the pithills of the small coal workings, the low mounds of which are still all round the Inn and the cottage opposite, fragments of medieval pot have been found. Traditions date the Inn to 1553 or 1558 when it is said that a bunch of green leaves or a bush was hung out after a brewing to welcome travellers. The Inn should emerge in the sixteenth century, when old monastic properties were changing hands, coming into the estate of the predecessors of the Fevershams, may seem to reinforce those traditions that suppose the Inn was founded earlier by the friars. About the middle of the Georgian's eighteenth century, the farmers of the upper Esk dales, Commondale, Danby and the Fryups, established a market for surplus corn at Blakey Inn. They delivered and sold there to horse breeders and stable owners of Ryedale. 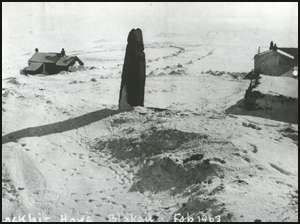 The oldest landlord whose name we know was John Portus, living at Blakey House, High Blakey, of High Blakehow House, as it was also known. His descendants kept the Inn for some generations. About 1783, another of the family took in two acres of moor on the north side of the Inn. His pioneering but unsuccessful effort to grow wheat and potatoes, at 1,325 feet above sea level, gained him a modest immortality.

The Maws enlarged the Inn, adding the present living room and a large chamber room above it. They emigrated to America. Mrs Potter kept it on as the Lion Inn in the 1870s until she married George Morgan, the mining engineer of the Sherrif Pit. Later Blakey had its own iron mine, on the Farndale side of the rigg linked by a branch tramway to the main railway, which worked until about 1900. The custom they brought was demanding.

Setbacks came with the twentieth century. First the Farndale mine closed and then those of Rosedale. The railways were demolished and Phillip Johnson had to spend much of his time farming at Church House, Farndale. His widow carried on after his death and then his son Fred Johnson, who kept a pony, some pigs, two or three cows and two large dogs at the Inn. Since then a new epoch has begun in the history of the hostelry. Better highways and the motor car have brought Blakey back into the mainstream of summer tourist traffic and its dining room and bars are known to many. No longer is the ale served in half gallon jugs.

A row of parked cars and the ancient waymarks - Fat Betty and Ralphs Cross a mile to the north - bear witness to the continuous tradition of travel to Blakey still a mystery but perhaps one of Yorkshire's oldest Inns. 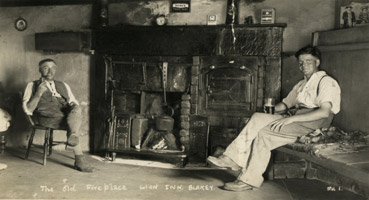